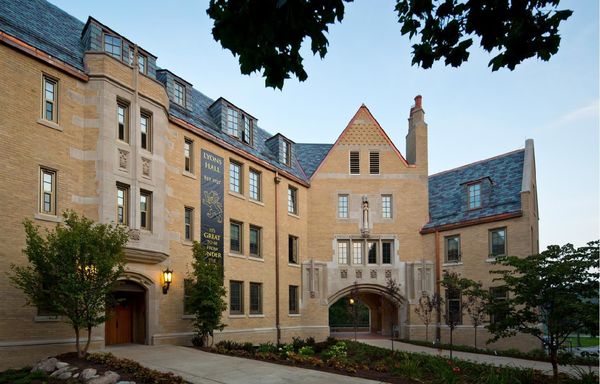 Opened in 1927 as a men’s residence hall, Lyons Hall is located in close proximity to St. Mary’s Lake and is known for its picturesque views from the archway. It is also the only residence hall featured in the movie, “Rudy.” Dedicated in honor of Joseph Lyons, a popular English professor and the first layman buried in the Holy Cross Community Cemetery, the hall was converted to a women’s residence in 1974. Each year, hall leadership coordinates the Mara Fox Run, which raises funds for a scholarship named in honor of former Lyons Hall resident Mara Fox who was killed by a drunk driver in 1993. Lyons Hall also annually hosts Rinking for Riley to benefit the Riley Hospital for Children in Indianapolis. Professor Ed Hums and his wife Shirley are one of two faculty couples on campus who live in residence. Together, they love sharing life with the women of Lyons, hosting students in their apartment and attending hall events throughout the year.